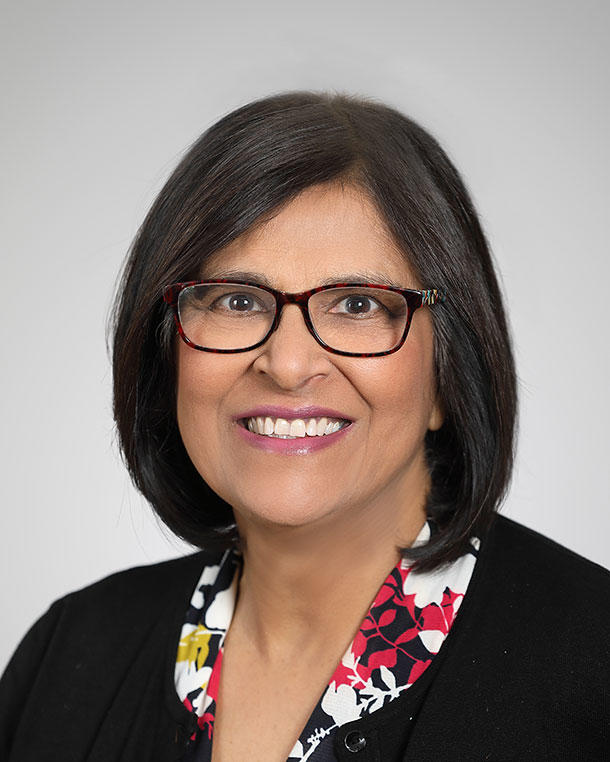 Dr. Sinha received a B.S. with honors and M.SC. in biochemistry from the University of Stirling in Scotland, and a Ph.D. in nutritional sciences from the University of Maryland. She began work at the NCI in the Laboratory of Cellular Carcinogenesis and Tumor Promotion in 1987, was selected as a Cancer Prevention Research Fellow in 1990, and later joined the Division of Cancer Epidemiology and Genetics in 1992. Dr. Sinha was promoted to senior investigator in 2001 and co-principal investigator of the NIH-AARP Diet and Health Study. She served for many years as Deputy Chief of the Nutritional Epidemiology Branch.

Dr. Sinha was awarded a fellowship from the Japanese Foundation for Cancer Research in 2001 and 1997, Sigma Xi Distinguished Lectureship 2005; and in 2007 was invited to present at the prestigious 38th International Princess Takamatsu Symposium, Tokyo, Japan. She has received the NIH Award of Merit, Technology Transfer Award, DCEG Special Appreciation Award, and several performance awards. Dr. Sinha was one of the founding members of the steering committee of the Molecular Epidemiology Group of the American Association for Cancer Research from 1997-1998, and of the Nutritional Epidemiology Research Group of the American Society of Nutritional Sciences from 1998-2000. She was a member of the working group for the IARC Monograph on the Evaluation of Carcinogenic Risks to Humans, (Volumes 92, 114, 116), and was a reviewer for the American Institute for Cancer Research/World Cancer Research Fund report Food, Nutrition, Physical Activity, and Prevention of Cancer (2007 and 1997 editions). As an expert in the field of nutritional epidemiology, Dr. Sinha regularly chairs international committees and sessions at national meetings, as well as organizes meetings, symposia, and workshops. She was the president of the 8th International Conference on Carcinogens and Mutagenic–substituted Aryl Compounds and edited a special issue of Mutation Research – Fundamental and Molecular Mechanisms in 2002. She serves on the Editorial Board of Cancer Epidemiology, Biomarkers and Prevention (CEBP), and the journal of the Japanese Cancer Association, Cancer Science. In 2020, she was awarded the Fred P. Li Impact Award by CEBP for her article, "Collecting Fecal Samples for Microbiome Analyses in Epidemiology Studies.”

Dr. Sinha conducts interdisciplinary research to elucidate the dietary exposures and biological mechanisms associated with cancer risk, including the role of the microbiome.

Only a small number of dietary components are convincingly linked causally to cancer, even though diet is thought to be important in the etiology of human cancers. The goal of our research is to explain the complex role of diet in cancer etiology, using an interdisciplinary approach that integrates biological mechanisms with epidemiologic studies. An aim of the Metabolic Epidemiology Branch is to improve dietary exposure assessment using questionnaires and novel biochemical measures to elucidate dietary exposures and biological mechanisms associated with cancer risk, including the role of genetic susceptibility. Dr. Sinha is particularly interested in examining the role of meat, poultry, and fish in relation to cancer risk. She also studies non-nutritive constituents of diet, e.g., carcinogens formed during the cooking process and chemopreventive properties of coffee.

Asia is undergoing marked changes in diet, lifestyle, and chronic disease patterns. Dietary characteristics unique to Asia may be of particular interest. In high-income societies, over one-third of cancers are believed to be attributable to potentially modifiable, lifestyle-related exposures, such as diet, physical activity, and obesity. However, the relationship between diet and cancer risk within Asians are largely unexplored, despite the startling prevalence of diet-related conditions that may affect cancer and chronic disease risk, such as insulin resistance and hyperlipidemia. Dr. Sinha is actively involved in dietary studies in the Asian Cohort Consortium.

Role of Gut Microflora and Health

An evolving hypothesis is that dysbiosis, which is maladaptation of the commensal human microbial community, may contribute to disease development. Furthermore, cancer may be caused or prevented from an interplay between diet, gut bacteria, and microbial metabolites. To date, there are few well-conducted epidemiologic studies evaluating the role of the human microbiota and its related metabolites in cancer development.

Dr. Sinha’s vision is to advance epidemiologic research on the microbiome in both extra- and intramural programs. She has taken a four-pronged approach to achieve this vision: (1) conducting methods studies to develop best practices including methods for collecting specimens, developing quality control standards, extracting and sequencing DNA, comparing different bioinformatics pipelines, and conducting statistical analyses; (2) incorporating fecal and oral collection into new or existing cohorts; (3) evaluating associations of cancer risk factors, such as body mass index and diet, with the microbiome and metabolome; and (4) conducting etiologic studies.

Learn more about the human microbiome and cancer.