NCI Dose Estimation and Predicted Cancer Risk for Residents of the Marshall Islands Exposed to Radioactive Fallout from U.S. Nuclear Weapons Testing at Bikini and Enewetak

Between 1946 and 1958 the United States tested 66 nuclear weapons on or near Bikini and Enewetak atolls, which had previously been evacuated. NCI investigators concluded, based on extensive analyses described in their publications, that populations living on any of the other atolls in the Marshall Islands archipelago were exposed to measurable radioactive fallout from 20 of those tests.

In this carefully considered analysis, National Cancer Institute (NCI) experts estimate that as much as 1.6% of all cancers among those residents of the Marshall Islands alive between 1948 and 1970 might be attributable to radiation exposures resulting from nuclear testing fallout. Due to uncertainly inherent to these analyses, the authors calculated a 90% confidence interval of 0.4% to 3.6%.

Purpose of the NCI Investigation 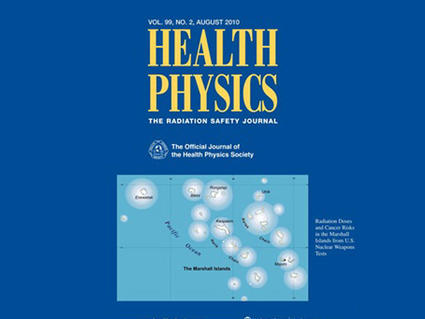 In June 2004, the U.S. Senate Committee on Energy and Natural Resources asked the NCI to provide its expert opinion on the baseline cancer risk and number of cancers expected among residents of the Marshall Islands as a result of exposures to radioactive fallout from U.S. nuclear weapons tests that were conducted there from 1946 through 1958. In September 2004, the NCI provided the Committee with preliminary cancer risk estimates and a discussion of their basis in a report titled Estimation of the Baseline Number of Cancers Among Marshallese and the Number of Cancers Attributable to Exposure to Fallout from Nuclear Weapons Testing Conducted in the Marshall Islands (PDF). That analysis was based on a number of conservative assumptions designed to avoid underestimating the actual cancer risks and used information that could be collected quickly to provide a timely response.

In a considerably more thorough analysis published in the August 2010 issue of the journal Health Physics, NCI presents revised estimates of the number of excess (radiation-related) cancers for those residents who were exposed to radioactive fallout. These findings, reported in eight papers covering the subjects of external dose, internal dose, cancer risk projections, as well as the methodologies of dose reconstruction, are the result of several years of work to provide more precise estimates of cancer risk.

Summary of Analyses and Results

NCI's findings are based on the most detailed dose reconstruction to date. The analyses include populations living on all inhabited atolls (except the nuclear test site atolls which were unoccupied) and include dose contributions from each of the 20 nuclear tests that resulted in measurable fallout according to the NCI analysis.

The investigators estimated tissue-specific absorbed doses at all historically inhabited atolls from internal (ingested) and external radiation. The information is presented by atoll, nuclear test, and year of age of the population at time of exposure. The assessment of cancer risks is for all Marshallese alive at any time during the years 1948 through 1970.

The authors estimate that as much as 1.6% of all cancers (about 170 cancers) among those alive between 1948 and 1970 might be attributable to radiation exposures resulting from nuclear testing fallout. Due to uncertainly inherent to these analyses, the authors calculated a 90% confidence interval of 0.4% to 3.6%. For specific populations the doses and the risk varied widely depending on location. People living in northern atoll locations received higher doses and were subject to greater cancer risks. For the 82 people who lived on Rongelap atoll, the authors projected 55% of all cancers might be attributed to fallout exposure. For Utrik, where 157 people were exposed, 10% of all cancers might be attributed to fallout. For the much larger populations exposed in mid-latitude and southern atolls (e.g., Kwajalein and Majuro), about 2% or 1% (respectively) could be due to fallout. Confidence bounds were also calculated for these estimates.

The completed analysis projects about 170 excess cancers (radiation-related cases) to occur among more than 25,000 Marshallese, half of whom were born before 1948. This estimate is considerably lower than the 500 cases (9% of all cancers) projected by NCI in the preliminary response to the Senate request in 2004. That analysis, produced quickly, was purposely intended to avoid underestimation of the true cancer risk.

The estimated 170 excess cancers occurred in the context of about 10,600 cancers that would have spontaneously arisen among the same cohort of Marshallese for reasons unrelated to fallout. In the absence of reliable cancer incidence data from the Marshall Islands, the NCI investigators used the NCI Surveillance, Epidemiology, and End Results (SEER) database that tracks cancer incidence in a representative sample of the United States population. At the time of this analysis, the authors expect that all but about 65 of the 170 projected radiation-related cancers have already developed in the population.

Comparison of Published Estimates to Preliminary Figures Provided to Congress

The preliminary analysis conducted in 2004 was based on a number of conservative assumptions designed to avoid underestimating the actual cancer risks. The researchers used available information that could be collected quickly to provide a timely response. The present report was a scientifically rigorous study based on a more thorough and painstaking gathering of exposure data.

While most cancer types can be related to radiation exposure, certain organs appear more susceptible to the cancer-causing effects of the exposure. For this reason, the NCI estimated risks for the four cancers most likely to occur given the nature of the fallout exposures. They are cancers of the thyroid, stomach, and colon, as well as leukemia.

The percentage of cancers expected from the exposure to fallout varied by location of the population during the years of exposure. The lowest values are for residents of the southern atolls during the testing years, while highest values are for members of the Rongelap community in the northern atolls. The corresponding percentages of cancers due to radiation in the two locations are as follows: thyroid cancer (12% and 95%), leukemia (2% and 78%), stomach (1% and 48%), colon (1% and 64%), and all cancers combined (1% and 55%).

These improved estimates resulted from an extensive effort by NCI scientists over three years to collect and analyze all available relevant data, including many historical documents from the Atomic Energy Commission laboratory that conducted the fallout monitoring for the U.S. nuclear testing program. These historical measurements were collected, re-reviewed, and systematically integrated with more contemporary environmental radiation measurement data. In addition, scientists at the National Oceanic and Atmospheric Administration assisted NCI investigators with interpreting historical meteorological data and provided meteorological models to assist in reconstructing fallout deposition patterns. These new resources allowed investigators to construct exposure estimates for every atoll and from all nuclear tests conducted in the Marshall Islands.

Using the refined estimates of radiation doses, the investigators at NCI calculated cancer risks by applying statistical models for dose-specific risks from a recent report by an expert committee of the U.S. National Academies. As with any historical risk assessment of this kind, fallout-related radiation doses and associated cancer risks cannot be determined exactly and so are presented in the form of a "best" estimate and a range, consistent with the available data. This range is based on dose estimates from the study and the larger body of information from studies of cancer risk in other radiation-exposed populations. NCI investigators believe these efforts have resulted in substantially more accurate and judicious conclusions.

Nuclear testing took place on the islands and lagoons of Bikini Atoll and Enewetak Atoll or in nearby ocean waters. Radioactive debris from the detonations was dispersed into the atmosphere and was generally blown by the predominantly easterly winds towards the open ocean west of the Marshall Islands. In many cases, however, the winds at different altitudes blew in different directions, and upon occasion carried radioactive fallout to inhabited atolls. The radioactive debris that fell to the ground is termed fallout. The radiation doses resulting from fallout deposited on the atolls include three components: (1) doses from external radiation emitted by fallout deposited on the ground; (2) doses from ingested radioactive particles immediately or soon after fallout deposition, including accidental ingestion of particles, contamination of food, plates and eating utensils, as well as hands and faces; and (3) doses from contaminated seafood and locally grown fruits and vegetables, which occurred over long periods of time (months to years) after the fallout was deposited.

Radiation doses received by the residents of the Marshall Islands differed greatly by geographic location and year of birth. Of special concern is exposure at an early age because, in general, young children are more sensitive to radiation damage and received higher doses of radiation than adults.

By comparison, the annual dose from external radiation arising from exposure to natural radiation from the environment is 1 mGy in the U.S. and the dose from a single CT scan of the abdomen is typically 10 mGy.

Background and History of this Investigation

In June 2004, the U.S. Senate Committee on Energy and Natural Resources asked the NCI to provide its expert opinion on the baseline cancer risk and number of cancers expected among residents of the Marshall Islands as a result of exposures to radioactive fallout. In September 2004, the NCI provided the Committee with preliminary estimates and a discussion of their basis. In the summer of 2005, the U.S. House Committees on Natural Resources and on International Relations, Subcommittee on Asia and the Pacific, convened a joint oversight hearing on the "United States Nuclear Legacy in the Marshall Islands: Consideration of Issues Relating to the Changed Circumstances Petition". The Senate Committee on Energy and Natural Resources conducted a hearing on the same topic. At those hearings, NCI investigators summarized their 2004 analysis and specified plans to develop and submit for publication in the peer-reviewed literature refined estimates of doses and cancer risks and the methods employed to derive them. From 2005 to 2008, with assistance from experts at other federal agencies, NCI radiation dosimetrists and statisticians have worked to improve the 2004 estimates and their documentation. In December 2008, the manuscripts were submitted to Health Physics for extensive anonymous scientific peer review, followed by publication in August 2010.