DCEG research on the association between infectious agents and cancer has made significant improvements to public health.

Starting in the 1980s, DCEG investigators carried out landmark studies on the natural history of cervical cancer that firmly established HPV as the necessary cause of this malignancy (Schiffman et al., 1993, 2007). Their efforts laid the groundwork for vaccine development and improved strategies for screening. 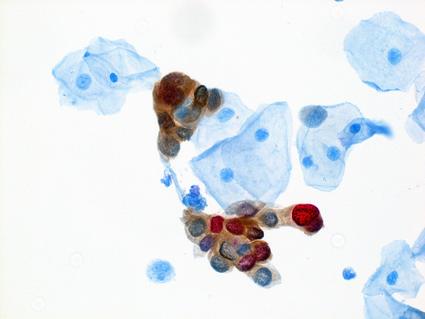 Human papillomavirus (HPV) is the cause of nearly all cervical cancers. Newer approaches to cervical cancer screening test for DNA (or RNA) of HPV at the cervix, whereas the Pap test detects abnormal cell changes associated with the development of cancer. Co-testing is now recommended for most women but clinicians were still unsure of the reassurance from a negative HPV test. Based on a study that included more than 1 million women, DCEG investigators determined that a negative test for HPV infection compared to a negative Pap test provides greater safety, or assurance, against future risk of cervical cancer. These findings provide evidence to support the currently recommended cotesting strategy with HPV and Pap, as well as the possibility of primary HPV testing as another alternative for cervical screening. Read more about this study.

The licensure of prophylactic HPV vaccines in the mid-2000s created the opportunity to reduce a large fraction of the disease burden of cervical cancer. However, the cost and logistical challenges of administering a three-dose regimen created a barrier to vaccinating adolescents. DCEG investigators reported that one or two doses of an HPV 16/18 vaccine may prevent cervical cancer just as effectively as three doses. Such an approach could lower the cost of vaccination and encourage the global dissemination of the vaccine.

In 2016, the U.S. Food and Drug Administration (FDA) approved a two-dose regimen of the nonavalent HPV vaccine for adolescents ages 9 through 14. Shortly after, the Centers for Disease Control and Prevention (CDC) recommended a two-dose regimen for all prophylactic HPV vaccines given to children ages 9 to 14, while keeping the three-dose regimen for those 15 or older. This decision was based on a review of evidence from randomized clinical trials and other studies, including research conducted by DCEG investigators. Read more about the two-dose CDC recommendation at Cancer.gov.

DCEG investigators also reported that the HPV 16/18 vaccine provides strong protection against HPV infections in every place in the body where HPV causes cancer.

In 2012 the U.S. Preventive Services Task Force and a coalition of health organizations published new guidelines for cervical cancer screening. DCEG studies into the use of HPV DNA testing and cytology to stratify women into accurate and precise risk categories have informed these revised guidelines.

In 2021, findings from the HIV/AIDS Cancer Match Study were used to inform an important revision to cervical cancer screening guidelines among HIV+ women.

Infection with Helicobacter pylori (H. pylori) —a bacterium found in the stomach—is a major cause of gastric cancer. Approximately two-thirds of the world’s population harbors the bacterium, with infection rates much higher in developing countries. Treatment of the infection with antibiotics had been shown in intervention trials to lower gastric cancer incidence when compared to placebo. Lowered gastric cancer mortality was also suggested, though benefits in older people and those with advanced precancerous lesions were unknown. DCEG investigators and collaborators found that a two-week course of H. pylori treatment given 15 years earlier was associated with lower gastric cancer incidence and mortality in older adults (aged 55 years and older at the beginning of the study). Incidence, but not mortality, was also statistically significantly reduced in subjects with advanced precancerous lesions initially. H. pylori treatment can benefit an entire population, not just the young or those with mild precancerous lesions in the stomach.

DCEG research provided the initial assessment of the specificity, sensitivity, and appropriate applications of the first-generation Human Immunodeficiency Virus (HIV) antibody testing system for diagnosis of HIV infection (Weiss et al., 1985). As a result of this work, those tests became standard care in the routine clinical practice of diagnosing individuals thought to have contracted Human Immunodeficiency Virus HIV.

A prospective study of HIV infection and the development of AIDS in subjects with hemophilia showed that a much larger proportion of HIV-infected persons would develop AIDS than previously thought (Goedert et al., 1989), a finding with broad impact for public health prevention programs and clinical practice.

New worker safety recommendations for the handling of concentrated HIV samples in the laboratory were influenced by a DCEG study of HIV infection among laboratory workers (Weiss et al., 1988).

Learn about current research on HIV/AIDS: the HIV-Cancer Match Study.

The monographs outline current understandings of cancer hazards from particular viruses based on a large body of scientific research. Investigators in IIB produced a considerable portion of the evidence cited in the NTP reports. Supported by DCEG research, the NTP’s results influence public health policies by regulatory bodies such as the CDC.

U.S. poliovirus vaccines were accidentally contaminated with simian virus 40 (SV40). These contaminated doses were widely administered from 1955 through 1962. The public was alarmed by the possible risks from exposure to this oncogenic virus. DCEG investigators published results from a study of newborns who received SV40-contaminated polio vaccine showing no increased risk of cancer (Fraumeni et al., 1963; Fraumeni et al., 1970; Mortimer et al., 1981).

The FDA decided not to screen the U.S. blood supply for human herpesvirus 8 (HHV-8) after DCEG research demonstrated that serological tests for HHV-8 had poor reproducibility (Rabkin et al., 1998).