In 1995, the NCI launched the NIH-AARP Diet and Health Study, a cohort that was and remains the largest prospective in-depth study examining the relationship between diet, lifestyle, and cancer risk.

In partnership with AARP, more than 567,000 older Americans participated in the study which helped redefine research on diet and health.

Many of the study's findings have also changed the public's perception of cancer and diet, including the relationship between drinking coffee and a lower risk of dying from heart disease, respiratory disease, stroke, injuries and accidents, diabetes, and infections.

Further investigations explored the trade-offs between sedentary behavior and physical activity; adults who were more active had lower overall mortality by replacing an hour of sitting with exercise.

The NIH-AARP Diet and Health Study's design continues to inspire new investigations, such as the Connect for Cancer Prevention Study.

Read more about Dr. Schatzkin and his work to address the methodological problems faced by prior epidemiologic investigations of diet and health. 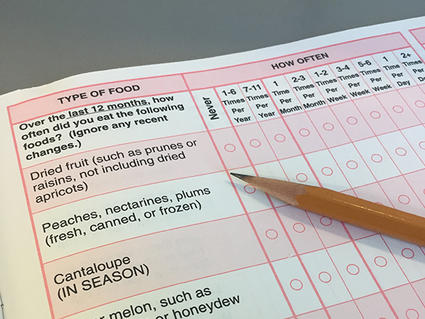 Nearly 25 years ago, the NCI launched the largest prospective in-depth study on diet and health.

The NIH-AARP Diet and Health Study was developed at the National Cancer Institute to improve our understanding of the relationship between diet and health. It remains the largest prospective in-depth study of diet and health ever conducted. The study was made possible by a collaboration with AARP (formerly the American Association of Retired Persons), which helped researchers recruit over 500,000 participants.

To learn about participants’ diet, lifestyle, and health history they were asked to complete questionnaires. Investigators have linked those responses to various databases, further enriching this dataset.

The study has evolved over time, responding to the needs of researchers and taking advantage of scientific advances in molecular epidemiology. For instance, the investigators collected biospecimens that have since been used for microbiome research.

From 1995 through 1996, a baseline questionnaire*  was mailed to 3.5 million current members of the AARP, aged 50-71 years, who resided in one of six states (California, Florida, Pennsylvania, New Jersey, North Carolina, and Louisiana) or in two metropolitan areas (Atlanta, Georgia and Detroit, Michigan). The questionnaire included a dietary section as well as some lifestyle questions.

Over 500,000 people returned the questionnaire, making this the largest prospective in-depth study of diet and health ever conducted. In 1996 and 1997, the participants were mailed a risk factor questionnaire that asked additional questions, including physical activity, cancer screening and family medical history, and early life diet and body size. In 2004 through 2006, participants received a follow-up questionnaire that included questions on physical activity, medication use, other health diagnoses, and family history of cancer.

Investigators have followed up with state cancer registries and the National Death Index to find out whether participants had cancer or died since joining the study. Linking participant data to other resources has further enriched the study. These include Medicare files, Census files, and geospatial datasets.

With over 400 scientific publications and counting, the NIH-AARP Diet and Health Study has produced results on nearly every aspect of health. Below is a selection of some of the major findings.

Complete bibliography of papers published using data from the study.

Novel methods for exposure assessment were established for and validated with the study, including two web-based applications:

Activities Completed over Time in 24 hours (ACT-24)
ACT-24 estimates total time spent and associated energy expenditure from sleeping, sitting, and engaging in physical activity during the previous day. This tool overcomes the limitations of traditional physical activity questionnaires, which relied on long-term recall to assess habitual behaviors and did not assess the full spectrum of sedentary behaviors.

Data from the study are available for use by established researchers, and project proposals can be submitted to the NIH-AARP Diet & Health Study Tracking and Review System (STaRS) . Publication policy and acknowledgments requirements are available on the STaRS website. If you are not yet a member, the login page will give you the option to register for an account.

If you are a participant in the study and would like to update your address or some additional information, please feel free to email or call us at 1-888-302-6672. An email response may take longer than expected due to the high volume of emails. We greatly appreciate your participation and your contributions to this important study.