Epidemiological Studies of Radiation-Related Cancers and Other Diseases

Scientists in the Radiation Epidemiology Branch (REB) have been involved in a multilateral collaboration for several years with researchers and scientists in Belarus, Ukraine, and Russia to conduct epidemiological studies of thyroid diseases and leukemia among the populations affected by the 1986 Chernobyl accident in Ukraine.

The accident exposed large numbers of people in Ukraine, Belarus and Russia to radioactive iodines, principally I-131, which concentrates in the thyroid gland (Hatch, et al., 2005; Cardis and Hatch, 2011). From 1998 to 2007/8, biennial thyroid screening examinations were conducted among approximately 25,000 individuals exposed to the accident as children or adolescents in Ukraine and Belarus. The initial report from Ukraine provides convincing evidence in support of earlier reports of a five- or six-fold radiation-related increase in thyroid cancer among those who were young at the time of the accident and includes individual dose estimates on all subjects. The data show a strong, approximately linear dose-response relationship.

Other studies in Ukraine include individuals exposed in utero to radioiodines, who may have a raised risk of thyroid neoplasia. The relationships between radiation and autoimmune thyroiditis, follicular adenoma, hyperthyroidism and hypothyroidism have also been assessed. Current efforts utilize national cancer registries for follow-up and various strategies for maintaining contact with these cohorts.

Following the accident, hundreds of thousands of clean-up workers (also called liquidators) from Ukraine were exposed primarily to external radiation with those sent earliest receiving the highest doses (185 mGy in 1986, 112 mGy in 1987 and 47 mGy in 1988-89). To date, studies of cancer among clean-up workers have focused on leukemia. The Radiation Epidemiology Branch (REB) in collaboration with the Research Center for Radiation Medicine in Ukraine has conducted a case-control study of leukemia and other hematological diseases based on a large cohort of male clean-up workers (~110,000), with individual doses to the bone marrow estimated using a new method developed for this study. Findings from the first phase of the study based on cases diagnosed between 1987-2000 have been summarized in three companion papers (Methods, Dosimetry, Risk analysis) published in Radiation Research (vol. 170, 2008). The study was extended to accrue cases for an additional six years.

For more information, read about the Study of Leukemia and Other Hematological Diseases Among Clean-up Workers in Ukraine After the Chernobyl Accident 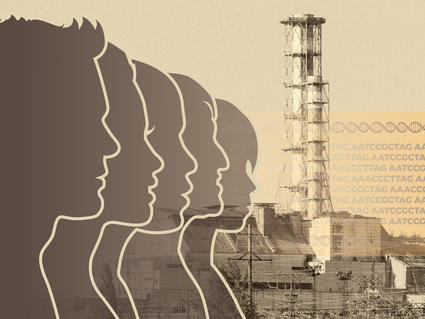 No evidence that exposure to parents resulted in new genetic changes being passed from parent to child.

DCEG investigators are applying the full capabilities of cutting edge molecular and genetic epidemiological methods to expand our knowledge on the relationship between ionizing radiation and cancer. To understand how exposure to parents may affect future offspring, experts have launched a study of parent-child trios in which at least one parent was exposed to Chernobyl radiation as a clean-up worker and/or evacuee from a contaminated area. REB researchers are applying whole genome sequencing techniques to thyroid tumor, adjacent normal, and blood samples obtained through the Chernobyl Tissue Bank to better understand the genetic makeup of this malignancy.

For more information, read about:

Genetic Effects in the Children of Adults Exposed to Radiation from the Chernobyl Accident - TRIO Study and
Comprehensive Genomic Characterization of Radiation-Related Thyroid Cancer in the Ukraine.

Good dosimetry is essential to estimate with reasonable accuracy the radiation risks resulting from the Chernobyl accident. The task of the REB dosimetrists has been to estimate the radiation doses, and their uncertainties, for all individuals involved in these epidemiological studies. Dosimetry work for the Chernobyl study includes: